Nationally, we are seeing extreme to exceptional (D3 to D4) drought conditions fall to their lowest point in more than 6 years.  Nowhere is that change more dramatic than in California.  The current (February 21, 2017) Drought Monitor for California notes the disappearance of D3/D4 from California.  At the California drought’s peak from August-October 2014, that percentage was nearly 82 percent.  As recently as early-December 2016, coverage of D3/D4 in California stood at 43 percent.

Data from the California Department of Water Resources indicates the snow that fell across the Sierra Nevada in January alone contained an average of two feet of liquid—more than 80 percent of the normal seasonal total (see figure below).  Adding snow that accumulated from October-December 2016 and during the first three weeks of February, the Sierra Nevada is ensured of an above-average snowpack for the first time in six years when the traditional peak snowpack date arrives on April 1. 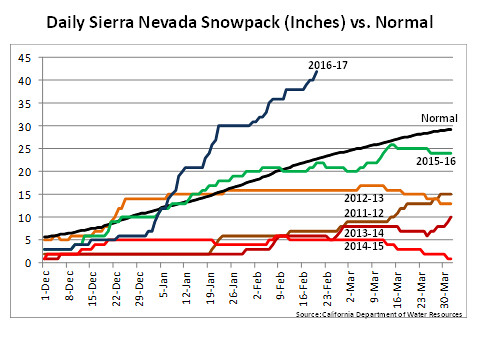 While most decisions about water allocations are made at the state level, the abundance of precipitation during California’s wet season; the promise of abundant, snowmelt-driven spring and summer runoff; and an already dramatic increase in statewide reservoir storage all bode well for a general easing of water restrictions in the wake of the five-year drought and for agriculture in general, the largest user of California’s stored water.

California is the most productive agricultural state in the nation, with more than $47 billion in cash receipts and $14.5 billion in net farm income in 2015.  It largest sectors include dairy (sales of about $6.3 billion), almonds (sales of more than $5.3 billion), and grapes (sales of nearly $5 billion).  Crop insurance indemnities for California crops doubled in 2014 to about $380 million and nearly doubled again in 2015 to $622 million before falling back to $250 million in 2016.  Pre-drought indemnities typically averaged around $115 million in the ten year period 2004-2013.

OutdoorWire, 4x4Wire, JeepWire, TrailTalk, MUIRNet-News, and 4x4Voice are all trademarks and publications of OutdoorWire, Inc. and MUIRNet Consulting.
Copyright (c) 1999-2019 OutdoorWire, Inc and MUIRNet Consulting - All Rights Reserved, no part of this publication may be reproduced in any form without express written permission. You may link freely to this site, but no further use is allowed without the express written permission of the owner of this material. All corporate trademarks are the property of their respective owners.